The IEEE Providence Section, URI, Brown and UMass Dartmouth student branches and the Providence GOLD affinity group are co-sponsoring a tour of the New England Wireless and Steam Museum in East Greenwich, RI.

IEEE is the coming together of three electrical societies. Two were based on Radio, the first of which was the Society of Wireless Telegraph Engineers, "the Swatties", formed in 1907 at MIT by John Stone. Walter Massie of Providence was a charter Swatty member. In 1912 the Swatties joined a New York city radio society to form IRE. Walter Massie was also a charter member of IRE, which some 50 years later merged with AIEE to form IEEE. Massie was born in 1872, the same year as Marconi, and he was an active wireless worker by the late 1890's. The New England Wireless and Steam Museum displays a coherer receiver which he built in 1899. Of more importance the museum also displays the complete two and one half story coastal wireless station, "PJ" which Massie built in 1907. This station with its working original equipment, is the oldest surviving wireless station in the world. It's a kind of a Plymouth Rock to the electronics industry and as such it is on the National Register of Historic Places. By 1909 Massie had outfitted a chain of coastal wireless stations reaching from Chatham, MA down the Atlantic Coast and up the Pacific Coast including seven stations in Alaska. He also outfitted the steamer President in 1908 which was the first commercial steamer equipped with wireless to travel in the Pacific Ocean. Also at the museum is an 1895 DeLaVergne oil engine of the kind Marconi used to power his 1903 station at Wellfleet. Other items of electrical interest are pieces of Cyrus Field's first Atlantic cable, many early telegraph and telephone items, numerous spark transmitters and radios. In the steam division of the museum you can see the only surviving George H. Corliss, 15' flywheel, steam engine working under live steam; the city of Hartford, CT's 1883 electric power plant; and URI's 1895 electric power plant in operation. The tour includes a talk by Bob Merriam on the technology of early electric power plants and wireless telegraph equipment.

Directions: To get to the museum, located in the SW corner of East Greenwich, RI 02818, take exit #8 South from US I-95. This puts you on RI RT #2. Travel South on RI RT#2 a little over 2 miles to the stop light at Frenchtown Road. Turn right, that is to the west, on Frenchtown Road, come up the hill about a mile to Tillinghast Road. Cross Tillinghast. Museum is on the left at 1300 Frenchtown Road. Gate is between two large oak trees. 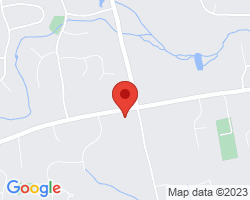