IEEE Research Boost | "Give your research an industrial edge"

IEEE Montreal Section and IEEE Industry Relations invites you to participate in the first Research Boost event to be held in Montreal on September 28, 2016. The aim of this event is to foster collaborative research projects and networking among the industry, government and academia, as well as to present some of the top candidates in their field of expertise. It is an evening event during which invited experts and leaders from the industry, government and academia, will present some of the state-of-the-art innovations in the fields of smart cities, intelligent transportation systems and internet of things. A special session is dedicated to a number of short-presentations to offer a great opportunity for participants, Graduate Students and Postdoctoral Fellows, to present the significance of their research to the industry in front of a distinguished judging panel. All presentations should be in English, and the focus should be on the application(s), technology and industrial aspects, rather than mathematical equations.

Registration is free but the number of places is limited. To reserve your seat, please follow the instructions here: RB2016 at Eventbrite. 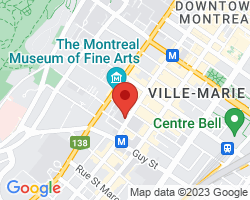 Bio: For a second consecutive mandate, Mr. Chitilian was elected city councillor, in November 2013, for the district of Bordeaux-Cartierville in the borough of Ahuntsic-Cartierville. He is the vice chairman of the Executive Committee of the City of Montreal, and is responsible for administrative reforms, youth programs, digital and smart city strategy and information technology.

During his previous mandate, he held an associate position in the Montreal Executive Committee for files pertaining youth and economic development. In 2011, Mr. Chitilian was designated the speaker of the Montreal city council, making him the youngest in the history of the city. Additionally, he served on the executive committee of the Conférences Régionales des élus (CRÉ) de Montréal, the Corporation of Economic and Community Development in the borough of Ahuntsic-Cartierville, as well as on the board of directors of the MR3 Relève organization. Finally, since 2012 and until very recently, he has been the vice-chairman of the Comité Consultatif d'urbanisme (CCU) in this borough.

A resident of Montreal for more than 25 years, Mr. Chitilian received his engineering degree, in 2004, from École Polytechnique de Montréal.

Bio: Mr. Barsoum has 20 years of experience at IBM, which began when he developed new technology business planning methods; this led him to training cohorts of consultants as they were hired into the business.

He continued consulting and secured mandates in various industries (mining, post secondary education, pharmaceutical industries are just some examples). He has been a keynote speaker around the world on the topics of smart transportation, smart cities, innovation, water management and climate change, and has been invited to advise governments on big data and clean technology initiatives.

In 2008, he was among the few Canadians selected by the Al Gore's Climate Project to receive training from the Nobel peace laureate. In 2011, he joined the board of directors of Mr. Gore's "Climate Reality Project Canada".  He is a director at the Canadian Water Network and works on several IBM initiatives related to resilience planning and cognitive computing, as well as a mentor in a Montreal-based smart city technology accelerator.

Bio: Mr. Fitzgerald brings over 25 years of experience in the Information Technology and Communications industry, having led sales, delivery and consulting teams in different  sectors such as the Energy and the Utility space, Governments, Transportation and the Manufacturing  industries.

Pierre held various management and consulting roles with major organizations such as IBM, Coopers & Lybrand, DMR/Fujitsu, EDS and HP, before joining Ericsson in 2011.

With an experience which spans in operations and management, in both private and public sectors, he worked with clients over the years to bring expertise in many areas, such as Strategy and Corporate Development, Organizational Transformation and Management.

He is now part of the Ericsson Global Energy & Utility Team with a focus on working and supporting the Ericsson teams and clients in North America.

After a period in Core Engineering at Bombardier aerospace, he co-founded and was CEO of two startups; one a technology incubator spinning out patented technologies; the other a retail automation franchiser.

As Partner & COO of TandemLaunch, he combines his passion for entrepreneurship, corporate development and deal flow with deep expertise in execution (engineering, product management, quality and operations) to carry out his mandate as a mentor and interim executive for TandemLaunch’s promising early-stage incubated ventures.

Bio: Mengjiao Zhao received the B.Sc degree in Electrical and Computer Engineering from North China University of Technology, Beijing, in 2014. She is currently working as a master research assistant in the Electrical and Computer Engineering department of Concordia University. Ms. Mengjiao was awarded the first prize in the 2016 RESMIQ Scientific Poster Competition on Iterative Kalman filter-based algorithms with sub-band for single speech channel. Her research interests include the areas of speech analysis, speech enhancement, and signal processing.

Bio: Xinrui Pu received his B.Sc. in Information Technology and Engineering from Southeast University, China in 2011 with the graduation thesis on filter antenna array. Currently, his a Master student in Electrical and Computer Engineering at Concordia University, Canada. He is working as a research assistant on speech signal processing. His research interests include speech enhancement, beamforming, speech dereverberation and sparse signal processing.

Bio: François Ruelland received a B.S. degree in electrical engineering from Laval University in 1981. He worked for a few years in the electrotechnical domain before entering the Société de Transport de Montréal (STM) in 1997. While working within the subway extension project toward the north, he attended graduate courses at École de Technologie Supérieure (ÉTS) where he received a Master degree in Engineering in 2005 for his project “une approche d’optimisation énergétique des profils de tunnel pour métro”. He obtained his PhD degree in electrical engineering at the same institution in 2013 for his research entitled “contribution à la modélisation et à la simulation énergétique des réseaux ferroviaires”. His current research at ÉTS pertain to load flow simulation of electrical train networks integrating nonlinear devices such as Energy Storage systems.

Bio: Nazli A. Khan Beigi (S’15) received the B.Sc. degree from Sharif University of Technology, Tehran, Iran, in 2003, and the M.Sc. from the University of Science and Technology, Tehran, Iran, in 2005, both in electrical engineering. From 2005 to 2014, she worked as electrical engineer in industrial projects in Iran. She is currently working toward the Ph.D. degree in electrical and computer engineering at Concordia University, Montreal, QC, Canada. Her research interests lie in the area of wireless communications and include information theory, channel coding, rateless codes, network coding, and non-orthogonal multiple access channels.

17:30   Registration opens and refreshments - In the presence of Prof. Alan Shepard, President of Concordia University.

20:10    Questions and discussion: Moderated by the judging panel

Thanks to all sponsors, keynote speakers, judges and participants, three awards of values $400, $200 and $100 are given. More details and photos are found on the Facebook page of IEEE Montreal Industry Relations.